Kardashian Trademark Rip-Off Or Not? Seven Questions to Ask Yourself

And now we bring you…the Kardashian T-shirt Controversy.  Is that logo that Khloe has been sporting a knock-off of an official emblem of the New York Department of Agriculture?

We have a clash of the old and the new. The state institution versus the pretender.  The long-established versus the new order.  Between the old-fashioned power family and the reality TV.  No, not the T-shirt; the Cuomos versus the Kardashians. What’s a more powerful brand, a political mini-dynasty, or the crown jewel of made-for-TV families?

This time, politics has won out, it appears.  What are they fighting over?

The State of New York says that the Kardashian clothing line uses a logo which too closely resembles a state seal. This is interesting for a number of reasons.

The New York seal, in fact, is a “certification mark,” meaning that it is something the state agrees to allow all users to display if their goods meet certain criteria. The mark may be “used by persons authorized by the certifier, certifies that the agricultural and food products are grown or processed within New York State in accordance with standards set forth in a [NY State] Department of Agriculture and Markets promotion program.”  New York registered this mark back in 2005 for “…certain agricultural commodities which are produced or processed in the State of New York.”

It is being reported that the letter from the State is claiming a “substantial” investment in “creating the respect and goodwill associated with the trademark.”

Turns out, it’s not at all uncommon for states to register agricultural trademarks.  California certifies everything from nuts to raisins to canteloupes, and has the trademark registrations to prove it.  From Texas to Florida to Alaska and Hawaii, all of these states have registered certification marks for agricultural goods.

But is this infringement?

Below is the evidence of “Pride Of New York” that was filed in the Trademark Office most recently: 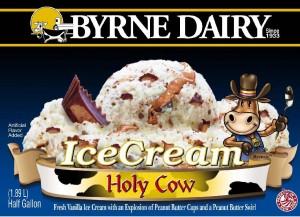 Though I make light of this situation, there is a serious point here somewhere, which is: trademark owners do not have absolute control over their marks.  If the state could establish harm and/or confusion in the marketplace, they can win.  Governor Cuomo helped and hurt the trademark cause with one sentence.  He said that he’d like to comment on this situation because “it may be at least a little more interesting than what I normally do.”  So that makes the IP lawyers feel a bit pleased with themselves.   Then he said that he thought “a copyright infringement letter” had been dispatched, though, legally, there are important differences between trademark and copyright.  This muddies the waters. First, not surprisingly, the media reports tend to talk about the state’s copyright. While the state could have a copyright in this logo, the issue really is about a trademark.  A copyright protects and original work of “authorship” or creation.  An infringement is something substantially similar. A trademark, on the other hand, is a “designation of origin,” which means that consumers will confuse the source of the product.  Substantial similarity or even identical copying is not the issue.  No one owns the rights for any mark for all purposes.

What other lesson can be learned? If you take someone else’s stuff, you may be called to answer.  Whether you think it is a trademark or a copyright, if it looks like someone else’s, you need to be prepared to defend yourself.  The defense that a T-shirt is not the same as an agricultural product certification will not save you from the need and expense of defending yourself.  As a practical matter, the state now has some visibility for its logo and the Kardashians have some notoriety for their clothing.

Partner Jess Collen published "Kardashian Trademark Rip-Off or Not? Seven Questions to Ask Yourself" on Forbes.com. Jess is a contributor on the site and regularly writes on trademarks, branding, copyright, advertising, and patent law.

You can read the full article on the Forbes website.